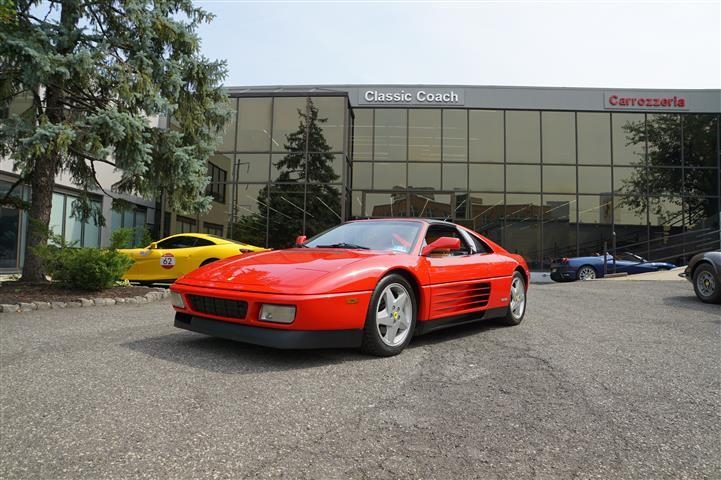 This Ferrari 348ts has been with the present second owner for 20 years and originally purchased the car with only 6000 mi. He has maintained the car in pristine condition with all up to date services including recent timing belt change. It has won 5 Platinum awards at North American Ferrari concours and is a Ferrari whose value will continue to rise.

The 348, badged 348 TB for the coupé (Transversale Berlinetta) and 348 TS for targa (Transversale Spider), featured a naturally aspirated 3.4-litre version of the quad-cam, four-valve-per-cylinder V8 engine. As with its predecessors, the model number was derived from this configuration, with the first two digits being the displacement of the engine and the third being the number of cylinders. The engine, which had a power output of 300 PS (221 kW; 296 hp), was mounted longitudinally and coupled to a transverse manual gearbox, like the Mondial T with which the 348 shared many components. The “T” in the model name 348 TB and TS refers to the transverse position of the gearbox. Overall, 2,894 examples of the 348 TB and 4,228 of the 348 TS were produced.

The 348’s styling differed from previous models with straked side air intakes and rectangular taillights resembling the Testarossa, stylistic themes reminiscent of the F40, the world’s fastest production car at the time, and other prestigious Ferrari models of the past.[6] The model was also the final design overseen by chief stylist Leonardo Fioravanti, known for such designs as the F40, Daytona, 512 Berlinetta Boxer, 288 GTO P5, P6 and others. The F355 that succeeded the 348 returned to the styling cues of the 328 with round tail lights and rounded side air scoops.

The 348 was fitted with dual-computer engine management using twin Bosch Motronic ECUs, double-redundant anti-lock brakes, and self-diagnosing air conditioning and heating systems. Late versions (1993 and beyond) have Japanese starter motors and Nippondenso power generators to improve reliability, as well as the battery located within the front left fender for better weight distribution.

U.S. spec 348’s have OBD-I engine management systems, though European variants do not come with the self-test push button installed, which is needed to activate this troubleshooting feature.

Similar to the Testarossa but departing from the 512 BB and 308/328, the oil and coolant radiators were relocated from the nose to the sides, widening the side of the car substantially, but making the cabin much easier to cool since hoses routing warm water no longer ran underneath the cabin as in the older front-radiator cars. This also had the side effect of making the doors very wide.

The 348 was equipped with a dry-sump oil system to prevent oil starvation at high speeds and during hard cornering. The oil level could only be accurately checked on the dipstick when the engine was running due to this setup. The 348 was fitted with adjustable ride-height suspension and a removable rear sub-frame to speed up the removal of the engine for maintenance.